How to Establish Credibility in Business

How Did You Build Your Business's Credibility?

Establishing your professional credibility is critical to your business/brand's success. Without credibility, people will not take you seriously and you won't get anywhere. You establish your credibility in several different ways and it will take some effort and tender loving care (TLC) on your part.
#Credibility #Trust #BusinessRelationships #customerrelationships #reputation…

Turning Networking into a Pleasant Experience Whether you like to network for your business or not, you still need to embrace the fact that it is absolutely necessary for your continued success. Not only do you need to network but you need to build your network with the most appropriate, relevant people as well.

Have You Read Any Books That Helped You Grow Your Business Lately?

This month, we are running our spring $0.99 special promotion of our books Masterful Blogging: How to Boost Your…

Why Is Greeting Your Connections on LinkedIn so Important? 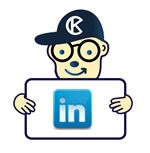 Even though LinkedIn is a social media channel for…

Using LinkedIn for 30 Minutes a Day

An issue that comes up regularly is about time. Everyone wonders how much time on LinkedIn (and on social media in general) is enough time to devote to make it work and to produce successful results for your business.

The answer to the question is slightly subjective although it is a good idea to have some sort of time range in mind. You should figure…

Using LinkedIn appropriately will lead to greater success for you as a business owner. However, it is important to understand which practices to avoid in LinkedIn also.

One of the very first things that people do when they go to a profile is look at the photo. They want to connect what the person looks like with their profile and the…

You may have heard the term “Social Capital,” which seems to be noticed more and more lately. It is related to “Social Selling,” which is selling that is achieved through the…

What You Should Know Before Joining a New Social Network

New social networks are surrounding you on a very regular basis. Sometimes it is difficult to know which ones are worthwhile for your business and which ones are not. Don’t compare them to a large network, such as Facebook. Read more...

Communicating through Email is one of your primary means of communication. It’s important to make sure that your credibility surrounds that communication and that your Email address is one that speaks “professionalism” not matter what. After all, it’s for business. Read more...

How to Connect With Influencers on LinkedIn

Networking for business is critical to your success. You find people with whom you can synergistically carve out a relationship that will be mutually beneficial and one that will stand the test of time. Connecting with influencers is key.  END_OF_DOCUMENT_TOKEN_TO_BE_REPLACED

When it comes to social media, quality versus quantity must be considered. This certainly applies to LinkedIn as well.…

As polite and appropriate as you try to be online, sometimes you may write something that is misconstrued or that…

Understanding the Basics of Google Plus

You may have heard people speaking about Google+. It is in direct competition with Facebook and should not be taken lightly.  There are many similarities between the two; however, Google+ has some features that you won’t find on Facebook. END_OF_DOCUMENT_TOKEN_TO_BE_REPLACED

At this point in the social media game, you understand how impactful Twitter is for your business. It is important to remember that growing your Twitter presence doesn’t happen overnight. It takes time, effort, and persistence to succeed with Twitter. Read more ...…
Continue

There are many social media trends that have been
introduced lately that are well worth considering for your business. Of course,
this doesn’t mean that the standard social media practices that you have been
using so far should be abandoned. Read more...

The Cost of Social Media

Businesses always seem to be giving away products and services in order to entice people into wanting to buy from them. Many offers are made through social media. The initial offer is free but what is the cost after that? Read More »

Your personal Facebook and Facebook business pages should remain separate, with no crossover. There are different etiquette standards for each. Of course, there will be times when you have a Facebook friend who is also a Facebook fan. END_OF_DOCUMENT_TOKEN_TO_BE_REPLACED

The Importance of Social Media Monitoring